Events are often cascaded one after the other.  It is important that you understand this concept and we have added a link to Microsoft for this additional information: Order of Events for Access Databases 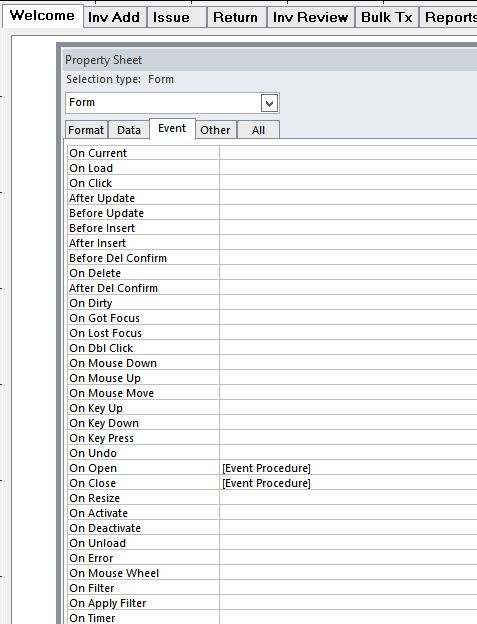 A form event is an action that is associated with a certain object. MS Access will trigger a wide range of events: mouse movement or clicks, changes to data, open or closing forms, and other activities. Events are most often the consequence of user action. There are 3 sections of our website devoted to different aspects of form design and event procedure programming:

We will stick to the most common event procedures you’ll need to create interactive forms.  Event procedure programming gives you the ability to control all the key functions within Access forms.  Many of these events are used in conjunction to add control over user actions within the forms and to provide data security and validation.

In Access 2010 Microsoft has expanded Access’s functionality by adding a handful of table-level event triggers.  These table events are implemented using macro coding.  Now you can program your databases just like the big boys using Oracle and SQL/Server!

Below is a table of contents for our Event Procedure Tutorial.  Use the right-side navigation links go to the specific example page.